Day 4 - Bayeux: the town and the tapestry.

Well, we're still in Normandy at Bayeux today - and this is a magical town with many preserved medieval buildings.  When you see some of the photos you could be forgiven for thinking you're looking at somewhere in England's Tudor past.  But there's a subtle difference - the Brits paint their buildings in black and white - whereas here they are cream and brown. 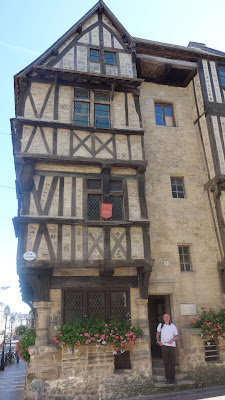 Aside from the town, the major attraction is the tapestry, which dates from just after 1066 - there's no accurate date on it's manufacture.  But we know it wasn't before, because of course it depicts the story of the events leading up to Harold getting shot in the eye by an arrow, and how William the Bastard became William the Conquerer - we mentioned him yesterday.

Isn't it funny how even back then they had their spin doctors - and how the winning side is always the good guy!  Nothing changes !!!

It's a majestic piece of work - unfortunately no photos allowed - it stretches over 70 metres long and appeared to be about 1m high.  The picture above has been borrowed from their promotional material.

Meanwhile back to the real world - just had to show you some of the delights from one of the many local patisseries - yum !!   You can see the bright sunlight - had to eat them real quick, before they went off !! 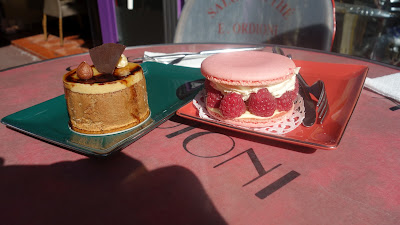 Here's a statue of Joan of Arc - she features quite heavily in this area - as that's where she was from, and how she helped defeat the English.  We'll see more of her over the coming day or two. 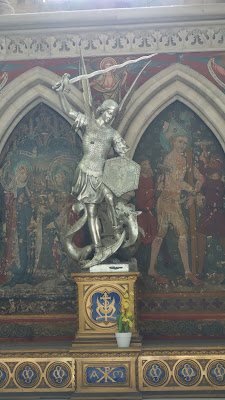 Also in Bayeux is a Commonwealth War Graves Cemetery - not as big as the American one we saw yesterday - 4,000 or so versus 14,000.  But there's some differences in that the US one only has US soldiers buried - this one has not only British and other Commonwealth countries - but also Polish, Czech, and more, and even German.  Another difference is in the US cemetery the age of the soldier is not on the tombstone - whereas here it is - without looking hard we saw too many 17 and 18 year olds.  Shameful !! 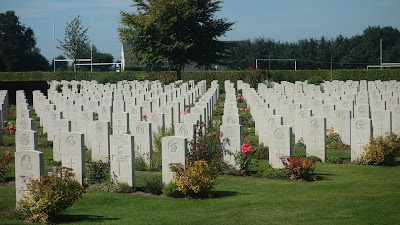 On that sombre note - we went back to our hotel room to prepare for another gastronomic delight that evening - will it be frogs legs - or snails - hmmm, stand by, we'll let you know......